A brief view of Offdanet

Email ThisBlogThis!Share to TwitterShare to FacebookShare to Pinterest
Labels: offdanet

Getting student writing back from BYOD

Now that we have a way of giving content to the students we really need a way of getting some back form them. The most basic content we want from them is some written work. We can use Offdanet to collect student writing by setting up a PHP table in our webserver. This is relatively straightforward. We just need to make a table which has field names that correspond to our Offdanet template page.
The following video shows how to do this. 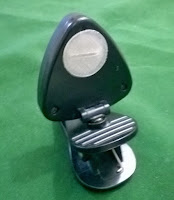 So what can you actually do with a 3D printer when you get one home to play with. Well, so far apart from the obligatory test pieces, I have found it incredibly useful for creating replacements for broken or lost pieces. The lost battery cover for a CR2032 battery in a guitar tuner and a broken microphone stand holder were first off the list. Then a bit of self-creation, rather than copying a broken object, a stand to hold my phone (camera) onto a tripod such that it could be used for stop motion animation (that is cantilevered out far enough to not see the legs of the tripod).

I have one of those really old iPads (1) which the kids no longer use, and the sound level is a bit low when I listen to the BBC news app. So a quick bit of design on Tinkercad and I now have a clip on horn speaker effect to funnel the speaker sound to the front. Posted the design back onto Internet to share, and it has already been downloaded.
All of these projects are pretty trivial but they are building my confidence in manipulative design and problem solving. Actually, exactly the effect I want to happen with the children when I get the printer into a classroom.  So I am having fun, and learning a new skill set, and finding lots of little things around the house that just need an extra piece…

If you don’t believe that 3D printers will be in every home within a few short years then you need to wake up. The 3D printer will be part of the IoT, and many of the small objects that you need will be printed for you directly from the Internet to your printer.  No more shipping. At first, when writing this I was inclined to edit "home" to be First World homes, but I think not. In other economies this may at first be in the community centre or a local shop, but the product will be produced in the neighbourhood none-the-less. The cost of the printer I am using is less than my Smart Phone, and we all know how ubiquitous smartphones have become.

Putting a Web Browser into PowerPoint

Instead of using a separate window you can do your browsing and look ups within a presentation by having a web browser on one of your pages. Use a show & return hyperlink to get to the page when you want to bring up some live content.


The spreadsheet is available at http://fs.50webs.com/files/running-records.xlsx
Posted by TWICT at 8:52 AM No comments:

Learning to use Excel - create self test spelling spreadsheet.

Pop Up Boxes in Word - tidy but a little more difficult

This way is not as straightforward as our previous Hyperlink method, but the results are much nicer.
You can find the sample document here .

Add some extra information in the form of pop up boxes by utilizing the Screentip in hyperlinks.
Posted by TWICT at 8:50 PM No comments:

You can use this technique to have a video presented to a student that they can take notes about directly. They are not presented with two windows to switch between nor are they distracted by a full internet browser. The video does not inflate the file size since it remains on YouTube. You can have multiple videos in the one document. You can find a sample here (this will download a zip file called verbs2 which has a word document inside - source qt.net.nz).
Posted by TWICT at 8:11 PM 2 comments:

Using drop down boxes in Word to teach punctuation and grammar.